How Adding Video to Our Podcast Increased Episode Downloads by 50% 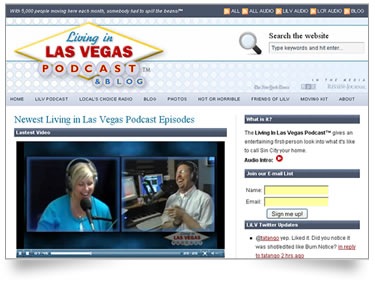 The Living in Las Vegas Podcast has been a testing ground of sorts for PodWorx.  As a matter of fact, it was the early success of the Living in Las Vegas (LiLV) Podcast that brought about the launch of PodWorx in the first place!  (Having already proven that a podcast can help a company make money, as it did for, the LiLV Podcast cemented the concept that a podcast, when done right, can influence listeners to take action on your behalf.)

Anywho, I’ve used the LiLV Podcast platform for other testing as well, most recently to answer this question:

What effect does adding video have on an audio podcast?

Because of my workload, I’ve not produced as many LiLV episodes as I (or our viewers/listeners) would like.  As a result, I was seeing an understandable decrease in the number of downloads per episode.  I was not too happy about the decrease. . .but again. . .I understood.  In appreciation to those listeners who stuck with the show, I wanted to offer up something new. . .an “inside baseball” look into what producing the LiLV Podcast looks like.  So, the last couple of episodes have been produced as a live streaming video production, with live chat.

The feedback from the hundreds of people around the world who attended the live shows was gratifying. But what I was really curious about was whether or not adding the ability to download video on demand would positively impact the number of times a particular episode would be downloaded.

The answer, I’ve recently learned, is that adding video does increase the number of downloads per episodes. . .significantly.

Now, because the subject matter of every episode is different, some are downloaded more than others.  But when I compared the last two episodes we produced that did not have a downloadable video option (64: Dining at Wynn Encore, New Year’s Eve with 20-Somethings and 65: Living the Loft Lifestyle in Las Vegas) with the last two episodes that did have a video download option (66: Learning About the Origins of Las Vegas at Springs Preserve and ), I measured a 50.3% increase in episodes downloaded.

There were three download options available for each show: mp3 (audio), flv (video) and mp4 (video).The breakdown of episodes download for the last two shows looked like this:

I have to admit I was a bit surprised by these results.  I felt that video would certainly bump up the numbers but did not expect video to account for two-thirds of each episode’s downloads.

What This Means to Me (and You)

It is clear to me that in this Internet world of ours, even though we are all so easily connected, people want to feel a real connection with others during their online travels.  And adding video to your podcast (or adding video in general), when the video is well-produced (content+technically) goes a long way toward improving the approachability of your website and further humanizes what can be a less-than-human(y) environment.

This means that if you’re even remotely toying with the idea of adding video to your podcast as a means of driving more downloads and bringing yourself closer to your website visitors, I’d advise you to do so.  The increase in numbers is gratifying and besides, now your mom can finally see what you’ve been doing all this time!

By the way, for those who’ve recently added a video to their marketing efforts, I’d like to hear what you’ve experienced.  Are you seeing an increase in downloads as well?  Is the effort the same, less, or more than with an audio-only show?  Let me know.